Become a Fan of Fans 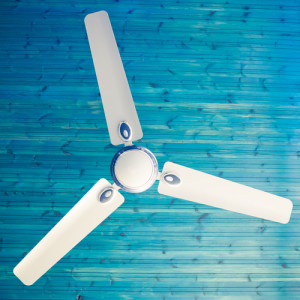 Ceiling fans aren’t just about moving air, they are an important part of creating the right atmosphere in your home. Before choosing a fan, consider what you really want it to do.

Being smart isn’t just for phones. Big Ass Fan company has developed smart residential fans that have motion sensors, can detect ambient air temperature and humidity, and even connect with the Nest Learning Thermostat. These fans are about keeping the temperature and atmosphere in your home at optimum levels using the least amount of energy. With five-ply bamboo blades and an automotive grade paint on its glass-infused composite finish, the Haiku fan works both indoors and outside on patios and gazebos.

Older homes that don’t have central air-conditioning can be fitted with a whole house fan. These fans, typically installed in ceilings of halls or stairways and venting into attics, draw cool air from open windows throughout the home and can cool skin temperatures by up to 10°F and attic temperatures by as much 40°F. Newer designs offer quiet operation and tremendous energy savings. QuietCool suggests its fans can lower your energy bills and they’re good for the environment.

Different from whole house fans, attic fans vent hot attic air to the outside, but do not draw air through the living spaces. Typically installed near the gable vent, attic fans can extend the life of your roof by removing trapped moisture from the attic and releasing the buildup of heat that can warp the roof’s structural components. Solar-powered attic fans operate using only solar power and is a green alternative to a standard electric attic fan, but once the sun sets, the fan needs an alternate source of energy. The U.S. Sunlight solar fan compensates for this by allowing the fan to switch between solar and your home’s electrical power when sunlight isn’t available.

Window fans fit within the window frame similar to a window air conditioner, but use less energy to operate. The most energy efficient way to use them is to use them at night when the outside air is cooler. This method allows for the delay or sometimes eliminates the need to turn on air conditioning during the day. It uses electricity during off-peak night hours too.

Other options include free-standing box, floor, tower or pedestal fans. You can move these portable fans from room to room throughout the day. Hi-end air movers, like the Dyson bladeless fan move air more quietly than traditional fans and consume even less energy, are safer around small children because they have no blades and offer remote control, variable speed and other options.

With winter just around the corner, some homeowners may think they don’t need fans. However, fans can reduce your heating bills just as well as your cooling bills. Make sure your ceiling fans are reversible (look for a switch on the motor housing on traditional ceiling fans). In the winter, operate your ceiling fan clockwise and the blades will push warm air back down into the room reducing the heating requirements. A window fan in lower story windows and be reversed to push cooler air outside and pull warmer air down from the ceiling. Using exhaust fans in bathrooms and laundry rooms during the winter can reduce the buildup of moisture that leads to mold and mildew growth.

When looking at houses, note the locations you can install fans to reduce your energy costs. We can help you find contractors to install whole house and ceiling fans to give your home the best atmosphere for your family.